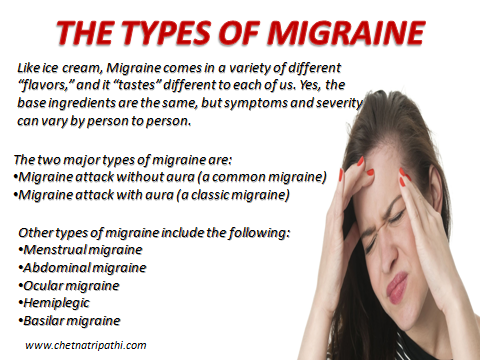 A migraine is a headache disorder characterized by recurrent headaches that are moderate to severe. Typically, migraine affects one-half of the head in pulsating nature, and last from two to 72 hours.

Associated symptoms may include nausea, vomiting, and sensitivity to light, sound, or smell.The pain is generally made worse by physical activity.

Migraines are believed to be due to a mixture of environmental and genetic factors.Changing hormone levels may also play a role.The risk of migraines usually decreases during pregnancy. The underlying mechanisms are not fully known. It is, however, believed to involve the nerves and blood vessels of the brain.

The types and symptoms of a migraine

Yes, Like ice cream, Migraine comes in a different type of  “flavors,” and it “tastes” different to each of us. However, the base ingredients are the same, but symptoms and severity can vary person to person.

The two major types of migraine are:

Migraine symptoms that are very common

Other symptoms that sometimes occur

Phases of a typical migraine attack

A migraine attack can typically be divided into four phases

Other types of a migraine include the following:

Menstrual migraine-For some women, migraine attacks occur during periods, or just before periods. The cause or trigger is thought to be the fall of the level of estrogen. The blood level of this chemical (hormone) falls just before a period.

The strict definition of a menstrual migraine is for the migraine attack to start at any time from two days before, to three days after the first day of a period. Also, that a migraine attack occurs around most (or all) periods. There are two types of patterns:

An abdominal migraine– This form of a migraine seen mainly in children. It is most common in children ages five-nine years old but can occur in adults as well. Instead of headaches, the child has attacks of tummy (abdominal) pain which last several hours. Typically, during each attack, here is no headache or only a mild headache. There may be associated with sickness (nausea),  vomiting, or aura symptoms.Commonly, children who have an abdominal migraine switch to develop a common migraine in their teenage years.

An ocular migraine– This is sometimes called retinal migraine, ophthalmic migraine or an eye migraine. It causes temporary loss of all or part of the vision in one eye.You can have them along with or after a migraine headache. Each attack usually occurs in the same eye. There are no abnormalities in the eye itself and vision return to normal.This problem is rare. It affects about 1 out of every 200 people who have migraines.

A hemiplegic migraine- This is rare. In addition to a severe headache, symptoms include weakness (like a temporary paralysis) of one side of the body. This may last up to several hours or even days, before resolving. Therefore, it is sometimes confused with a stroke. you may also have other temporary symptoms of

Basilar type migraine– Basilar migraines are headaches that start in the lower part of the brain, called the brainstem.The basilar artery is in the back of your head. Symptompt typically included a headache at the back side of the head ( rather than one-sided as in a common migraine)

They also tend to include some aura symptoms such as

These changes, called an aura, can happen about 10 minutes to 45 minutes before your head hurts.

See a doctor urgently if you develop any symptoms described above.

Drive more traffic to your blog using performance based marketing.

Recommended; NATURAL WAYS TO KILL A MIGRAINE AND HEADACHE

A migraine- THE INVISIBLE ILLNESS

6 thoughts on “TYPES AND EFFECTS OF A MIGRAINE”

This site uses Akismet to reduce spam. Learn how your comment data is processed.